For many a Migraine suffer Midrin® was the first prescription a white-coat jutted down on a Rx tablet.  It was our first trip to the pharmacist to get help for a horrible health problem.  For a great deal more of us it was the first step in our health struggle to be taken serious.  God bless Ed Bergeron, former President of Carnrick Laboratories—the pharmaceutical company that created that beloved maroon capsule called Midrin.

You guessed it the company is no longer in the game, to bad as it was a great little patient first company. Mike & Terri both interview Ed in the 1990’s and Carnrick Laboratories gave MAGNUM our first small grant in 1996 as the company was very supportive of Migraine disease awareness beyond digital marketing games of any type.

After years of false starts attempting to address the fact that that for some of us our quality of life was beginning to slip away and if one more doctor told us to just take more OTCs (Over The Counter drugs) we would want to scream!

But alas we get our first Rx filled and upon our next prodrome (good move & drug working so much better) if we are Migraine literate if not we will wait till our head is splitting in half (not such a good move) and deploy that first real medicine for a life-long serious condition and to our surprise several hours later a moderate Migraine is ‘under control’.

This was a whole new experience to say the least for many of us.  Such fond memories can be found all around the nation judging by phone calls, letters,  and e-mails which is why MAGNUM likes to call this the ‘Great Midrin®’ shortage beginning several years ago and the panic began!

No, really, a real panic mind you did happen.  People were genuinely shocked when the FDA began going after the DESI drugs with the new Administration and the lead up the The Patient Protection and Affordable Care Act (PPACA). 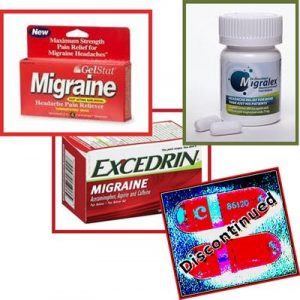 What direct connections there are we have no idea.  But we do know a great deal of older bio-engineered drugs are no longer with us just as we are seeing a great deal of generics disappear in the past two years.  Time will tell if this is experts clearing out the deadwood or bureaucracy being overly efficient, which often leads down a road of inefficiency turning left on ironically ally.

As far as coverage of the slow loss of Midrin from your local pharmacy there have been only a few well written articles about the subject.  Besides www.MigraineBlog.org‘s coverage our friend Migraine Health Advocate Teri Robert did some top notch coverage such as Migraine Abortive Midrin and Equivalents Update Feburary 9th, 2011. on the Migraine.com network.

Having said that let us all consider that generic Midrin is gone for good sans our friends who are compounding the cute little capsules.  Well don’t panic as we spoke to nationally renowned Migraine Expert, with an eye in alternative treatments and we are sure many readers have seen him before.  We would like you to meet Dr. Alexander Mauskop of CNN, FOX TV News, or MSNBC TV News fame? 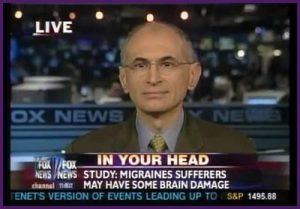 Dr. Mauskop and MAGNUM Executive Director Michael John Coleman discussed the Midrin crisis as Director Coleman noticed Dr. Mauskop’s spend years of his life as well as  put a great deal of his own money into developing a over the counter anti-Migraine drug called “Migralex®?

Like Midrin having both abortive properties and pain fighting properties having synergy to our old friend Midrin.  But his drug Migralex® is base on magnesium, a well known Migraine fighting agent. Migralex® like Midrin® his medicine is compounded, but unlike Midrin it is compounded with aspirin an NSAID which is well known to be very effective in the correct doses. Now aspirin if over used in very large amounts every few hours by its self can be problematic you may have heard—leading to rebound headache.

But rebound is NOT an issue as you are protected from it by just following the directions and taking the FDA recommended dose every 4 to 6 hours.  We have had a great deal of positive feedback about Migralex® and it offers readers a readily available Migraine medicine to purchase online today to replace your empty Midrin bottle. You can visit Dr Mauskop’s popular Migraine Blog, and make sure you discuss with you attending physician you might have found a milder buy very effect replacement for the defunct Midrin in case you has special health issues; such as health issues with magnesium or to say aspirin.

Next on our list of replacement players up at bat is an old friend the ever popular GelStat® Migraine.  GelStat came to MAGNUM’s attention as the first over the counter Migraine drug that offered an abortive capacity for the Migraine patient.  Now we thought this was great as triptans, though very effective, are very costly. GelStat® Migraine is very effective at just $8.00 for a box of 4 separate 2ml oral doses.

Now GelStat is based on feverfew, a tried and true alternative treatment being used for Migraine for hundreds of years.  But only till recently do we have quality testing, some of which can be viewed at the GelStat website for your perusal www.GelStat.com. We also have some background on fever.  Few on our Alternative Treatment section of www.migraines.org if you are still looking for more on the plant this drug is based on.

We have some excellent feedback and we have others who this does not seem to be that effective.  Several years ago we gave a hard working auto mechanic who cannot afford time off for a bad Migraine several boxes to try.  With the exception for a severe ER Migraine he was trilled effectiveness of this odd little pill that you take sublingual (under the tongue). 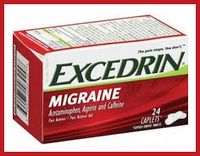 We can’t believe we are giving Excedrin® Migraine a free plug but this would not be good journalism if we did not point best last replacement player if our metaphoric team is kinda short and does not look like he is major league.  Having said that we would like to draw you attention to a quality product, yes MAGNUM will say it, but with this caveat–Excedrin® Migraine can be very effect for many of us who suffer from Migraine, but only those who suffer from mild Migraines, and an occasional moderate Migraine.  But children do not try Excedrin® Migraine on a severe or god forbid on a profound Migraine because the medication will fail and you will need a triptan or an ergot in short order.  So please discuss this with your doctor, but our idea would be for Migrainuers who suffer with mild to moderate Migraines you can consider this as a full time replacement for your RIP Midrin.  But talk to you doctor about having abortive such as a triptan around to take on your breakthrough attacks.  You may be able to get by with a few samples if you severe attacks are so rare.  Which is why Excedrin® Migraine is something you may consider as you say goodbye to Midrin® for good.

Of course if someone decides to put it back in production MAGNUM will be the first to let you know.  But we have come so far, so don’t get your hope up!  So say bye bye to that that last bottle you have been holding on to, as those Midrin pills are getting pretty long in the tooth any way and they are not going back into production.  Rest in peace little maroon pill! (OK; RIP to generic maroon & white little pills too!)